Forgotten lessons on part-to-part consistency from the 1980’s

A few weeks ago, I came across a video produced by the Ford Motor Company back in the 1980s. In this video, Ford executives from the Batavia transmission plant in the US compare and contrast their own performance against that of a Japanese supplier making an identical transmission.

The Ford team had learned that the repair frequency for the American made transmission was significantly higher (about 4x higher) than that of the Japanese made transmission, and so they set out to understand why.

In-spec is Not Good Enough

It’s important to note that American parts were not out of spec. They were all in-spec. In fact, the key lesson from the video is that "in-spec" is not good enough. Instead, it is critical to control process width in order to deliver improved product performance, and improved product reliability.

The Effect of Variability on Product Performance

Part-to-part variability (process width) has insidious effects, and firms from across industries pay for this variability in product performance, reliability, and warranty costs. Even though parts made at the extreme ends of the tolerance may pass inspection, or fit together in assembly, there is often a degradation of product performance associated with such parts.

This degradation in performance may be hard to measure on the assembly floor, and may only be detected after the product is put to use by the end customer as seen in the case of the transmission. This is the "cost of quality" as experienced by the end customer (Taguchi Loss Function).

In the case of the transmission, there were two important variables: bore and valve diameters and associated surface finishes. As the number of variables that impact product performance increases, the effect of variability compounds quickly, and problems with end product performance become very difficult and expensive to solve.

As an example, in the semiconductor capital equipment industry, you often see parts critical to functioning of the equipment being swapped out on new machines installed in the customer’s fab as part of a process called "chamber matching". Swapping ends when the performance of the new machine matches the performance of a previously installed machine in the fab. Swapping is required because there is significant variation in key features from part-to-part, even though each individual part and feature are in-spec.

A Pp of 1.4 brought the American plant to near defect-free production, but a much higher Pp (3.7 in the case of the transmission) was needed to deliver superior product performance and reliability. 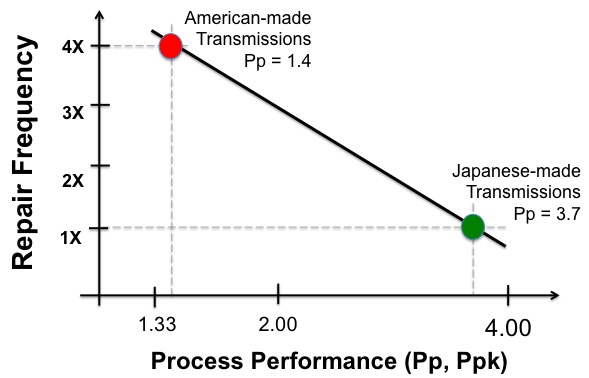